We all have our pet passions. Those things of which we spend a silly amount of time devoting our attention. That one thing that you know better than any of your friends simply because no one gets as excited about the subject as you do. I’m not talking about umbrella hobbies like video games or baking. I’m talking about that passion you have for Super Mario 3 or baking pies. You bore your friends with minutia about the subject and people begin to refer to you as the “Super Mario 3/Pie Guy/Gal.” If we, meaning you and I, spend any meaningful amount of time talking, without a doubt, I will subject you to a homily on the virtues of my pet passion: real ale.

To be technical, “real ale,” also referred to as “cask ale” or “cask beer,” is beer that undergoes a maturing secondary fermentation in the vessel from which it is served. More simply, real ale is beer that is carbonated naturally by means of sugar and yeast, rather than by the application of pressurized CO2, and then served from the vessel, the “cask,” in which it was naturally carbonated. The result of this technique is a living product swimming with yeast; it is “real.” Typically, real ale contains less alcohol (2.5%-4.5%) than other craft beers. Almost all modern beer sold in the US, craft beer included, is carbonated in relatively giant tanks then moved into kegs, bottles or cans (clap your hands) for consumption. Historically, all carbonated beer would have been carbonated using the natural cask method.

The beer is served somewhere near 55 degrees Fahrenheit, the natural temperature of most English cellars. As a result, the beer contains about half the amount of dissolved CO2 as beer served using the modern method causing the uninitiated to complain that real ale is “warm and flat.” Of course, real ale is far from warm, it is just not as cold as the flavor muting, near freezing temperature employed by modern bars. And it is not flat, it’s just not fizzy.

Another unique feature of real ale is that the flavor changes rapidly over the life of the cask. Real ale is typically served employing a hand pump or a gravity tap. To facilitate the free flow of beer, a small venting hole is opened in the top of the cask. As beer leaves the tap, oxygen enters the cask and oxidizes the beer. If the beer is not consumed within a few days (usually about three) from the introduction of oxygen, it will spoil due to excessive oxidation.

Over the last few decades, in the face of an ever increasing homogenized beer market, a grassroots movement to restore real ale emerged in the UK. This movement, the “Campaign for Real Ale,” or “CAMRA” for short, effectively brought back real ale to the British pub and fostered a now thriving real ale culture. While real ale is generally lauded by American craft brewers, the production of it rarely extends beyond novelty; it is rarely available and when it is, it is often brewed out of style or chock full of exotic ingredients in an attempt to make it more appealing to the consumer. The resulting beer often lacks the one quality that makes real ale so great: drinkability. 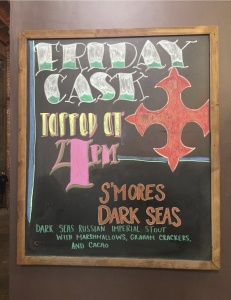 Example: Russian Imperial Stout (9.8%) on cask with marshmallows, graham crackers and cacao. Not my cup of sun tea.

The first time I drank an English pale ale “on cask,” I suddenly understood the pale ale style and what modern brewers are striving to imitate. I understood how beer was viewed as sustenance historically. And, oh yeah, it was delicious too. I’m a huge fan of real ale. Annoyingly huge.

The Cotswolds is rich with old traditional pubs that serve up heaps of traditional cask – serving the type of beer I want to drink, in the exact atmosphere I want to drink it. There’s a type of nostalgic alchemy that occurs in an old slouching pub, with no TVs, real ale in hand and seated before traditional country fare. I’m transported to a time with fewer distractions and more connections to the physical environment around me. The irony that I feel the need to chase the past to live in the present is not lost on me, but that is exactly what I am striving for. Live in the moment, not the cloud.

There will be many pictures of pints and pubs here. I hope that, in light of this post, you will understand what role drinking plays on this adventure. It’s not only a way to pass time or socialize or relax. Drinking real ale and visiting traditional pubs is every bit a part of my pilgrimage as spending time alone in the country. A pedestrian’s passionate pursuit of perfectly pulled pints perpetuating peaceful personhood.

4 thoughts on “Preface: On Real Ale”