I spent the remainder of my rest day on the wonderful patio of the George & Dragon in Hudswell. It was a lazy hazy day. Perfect for sitting still and watching a northern latitude slow motion sunset.

Feeling invigorated after a rest day, I left Richmond and headed east. My guide claimed that the walk would take 22 miles but according to my gps (and mostly because I chose an older path), I arrived in the village right over 24 miles.

There’s not much to say about the walk. It was very boring. Wainwright joked that he could walk 5 miles an hour on this stretch. I tried walking that fast but the closest I could get was just under 4 miles an hour. The one notable point about this stretch of the walk is that I encountered the first of many crop fields.

There was a detour due to a footpath closure but I decided to temp fate and jump a few fences in a bid not to extend my already long day. Luckily, it being Saturday, I didn’t run into anyone who would have scolded me.

About midday a quick shower rolled through. Lightning must have hit very close by because the flash and jarring thunder was instantaneous. It scared the bejeebus out of me. I peeked around at my trekking pole sticking out of my backpack like a lightning rod to make sure it wasn’t smoking.

About mile 19, I began to lose focus. By boots were wet due to walking through dense wet grass. Heavy wet boots coupled with the still hot damp air (and maybe a very quick pint at lunch) made me very tired. I just wanted to sit down and sleep for a few. 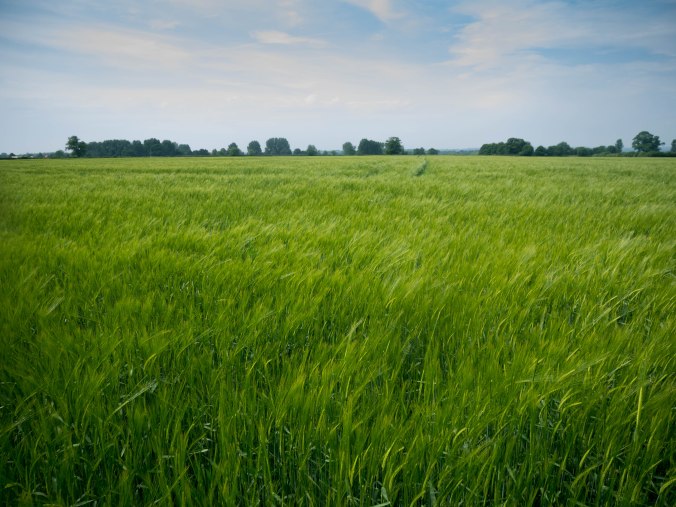 But I soldiered on. About a mile outside of my B&B’s village, a storm started to roll in. I picked up the pace as best I could and tried to outrun the rain. Hail started to fall as I reached my destination. I took my boots off and listened to the pounding rain and distant thunderstorms, triumphant.

I made my way up to my room and lay in the peaceful clamor dozing in and out of twilight sleep for about two hours. Got up, took a shower, and had a great curry dinner at the local pub. Came back to the room and laid back down on my small bed, feet hanging off the very the short edges. Turned on the TV to Jaws and had dreams that sharks were nibbling at my dangling feet.

Best night’s sleep I’ve had all trip. Today was going to be a challenge. Although there were relatively few miles to cover, there was a significant amount of verticality. I had to get up and over three peaks. 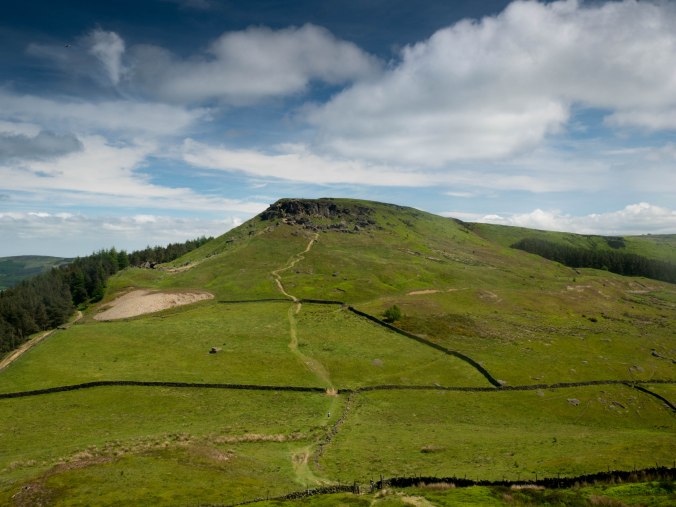 Down, Then Up, Then Down

My knees still hurt but they seem to be bearable after a few miles of either flat walking or accent. But descents are a whole different animal. I’m taking descents at a snail’s pace. It hurts and every step feels like it’s potentially a cussing opportunity.

Today began with a moderate climb and moderate descent through the first real forests I’ve encountered on this walk. To be honest, I thought I left the best parts of the trail in the Yorkshire Dales, but as I passed into the North York Moors this morning, I was greeted with some of the most stunning views of the trip. I found myself gazing, squinting, at the clear distant eastern horizon wondering if I was looking at the North Sea. But weirdly, I hoped it wasn’t the North Sea. I’m not ready to see the sea. I’m having too much fun. The sea means the end of this little adventure and I’m not ready to think about it being over. I chose to believe that I not yet close enough to see the North Sea.

I cleared three minor peaks today, each followed by a painfully slow cuss-laden descent.  The famous Wain Stones are located on the last peak of the day. I sat and watched people climb up the sheer face of the stones. I watched a man, very boldly, chip his name in a stone with a screwdriver and hammer, while no one raised a word (least of all foreign-me).

I’m now in an odd and popular half German half English inn a few miles off the trail (they came to pick me up), sipping on a very welcome clean and crisp German lager.