I’m laying comfortably in my B&B bed, belly full of breakfast with nowhere to walk. I have plans today but I am in no hurry to start them. I’ve walked the breadth of England, now it’s time to power down for a few hours. I’ll write a final wrap-up post in the next few days as I travel homeward. For now, days 11 and 12:

There isn’t much to write about the 19-mile walk between Clay Bank Top and Glaisdale. I’m sure the scenery is usually beautiful, but I didn’t see any of it. It was pure fog. All day long, fog.

The morning started with a climb up a steep hill to heather-clad moorlands. Nice wide track to walk on, so with nothing to see, I walked fast. There were quite a few sections of the trail that followed the highway, which added a small level of excitement as the narrow shoulder and lack of visibility meant that I had to be proactive about dodging the occasional oncoming traffic. 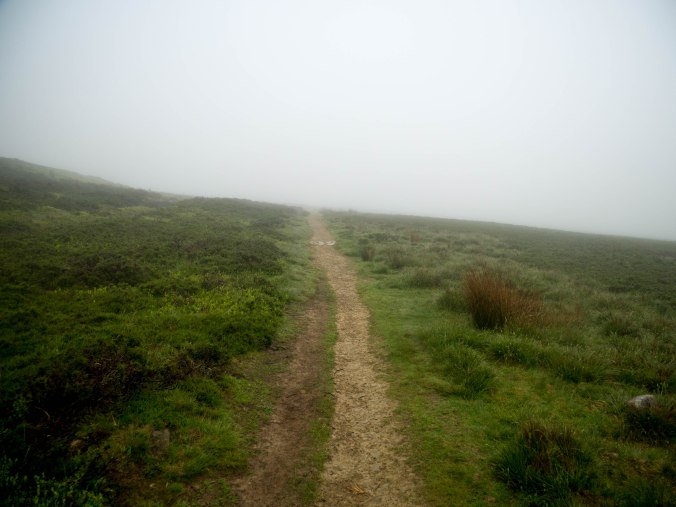 After a grey eternity, I dropped into the hilly and charming village of Gaisdale. I was instantly reminded of the hilly town I grew up in. I had a quick beer, checked into my B&B, and enjoyed yet another power nap before showering and heading back to the pub for dinner. Fueled up for my last walking day, I feel asleep in the first bed in about a week where my feet didn’t hang off the edge.

If there was one silver lining to this bleak cloud of a day, it was that my first real views of the North Sea were forestalled for one more day.

Sunshine and partially cloudy. Cool breeze and not too hot. Great viability. Guidebook: “For those who enjoy cosy English villages hidden among the gentlest, most bucolic scenery this fine country has to offer… this may be the best section of the walk.” My last day was shaping up to be perfect. 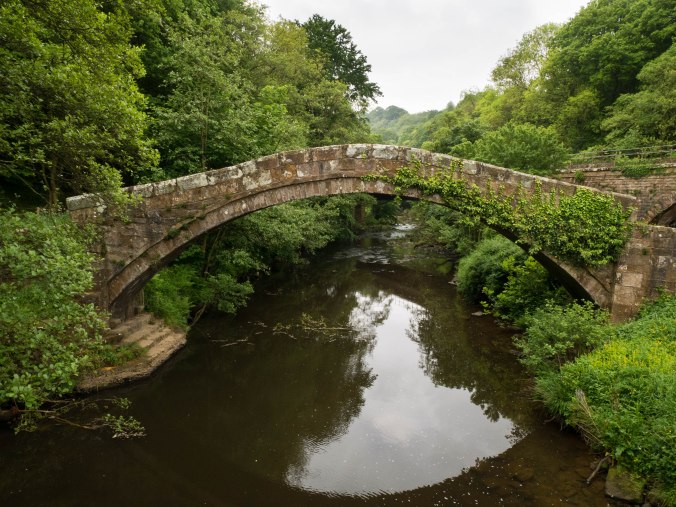 I headed out of Glaisdale through a mile of old growth forest, which gave way to the perfectly bucolic village of Egton Bridge. Trees with deep purple hues dappled the undulating horizon. Old aristocratic houses and their satellite ivy-covered cottages at every turn. This is exactly the type of walking I love, where you can lose a sense of modernity and easily imagine ambling down the same avenues a couple hundred years ago. 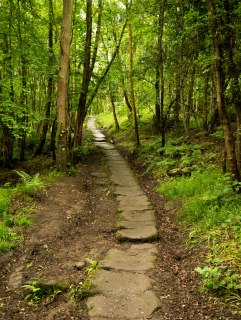 As soon as Egton Bridge disappeared from my rear view, I was transported to another point in history as I entered the time warp village of Grosmont. Like many English villages, especially in the north, Grosmont was once a thriving thoroughfare as a stop along a now defunct train line. Before cars became a feasible mode of transport, England had a love affair with the train. It was a romantic era, full of top hats, luxurious travel, and bellowing steam engines.

As the old train lines became disused with the efficiency of the car, the train infrastructure was dismantled. Many villages became isolated and economically depressed. The good people of Grosmont, at some point in that post train history, decided that the stream train and the station were too much part of their identity to let it slip away. So they banded together and renovated the station and bought the old train.

Walking on the platform at Grosmont station is very much like walking around the train station at Disneyland. The uniforms and trappings are all period appropriate but unlike Disneyland, there’s a level of authenticity in Grosmont that simply can’t be mimicked. It was a real treat to see that train build up steam, whistles blaring, and chug away. If there is one place I’ve visited on this walk that I want to come back to, it’s Grosmont.

From Grosmont, it was a climb for a mile up to another moor. Past a few curious bronze age standing stones and down through the charming hamlet of Little Beck and into more waterfall laden woods. There were two very cool features in the woods, not including the waterfalls. One: the Hermitage, a small dwelling carved out of a huge boulder, and two: an artisan bakery/restaurant fully isolated in the woods converted from an old stone gamekeeper’s cottage. It was strange to walk through the quiet woods and come upon a busy business, no cars in sight. As far as I could tell, everyone, employees and customers alike, must walk about a mile through the woods to get to the bakery.

Out of the woods and up through more moorland, I caught my first glimpse of the North Sea 6 miles away. It’s at this point on most walking days that I start counting down miles, anxious to sit down and eat and have a beer. But today, I found myself slowing down. Finding distractions. Feeling a little bit sadder with every mile (I have an app that alerts me to my progress). 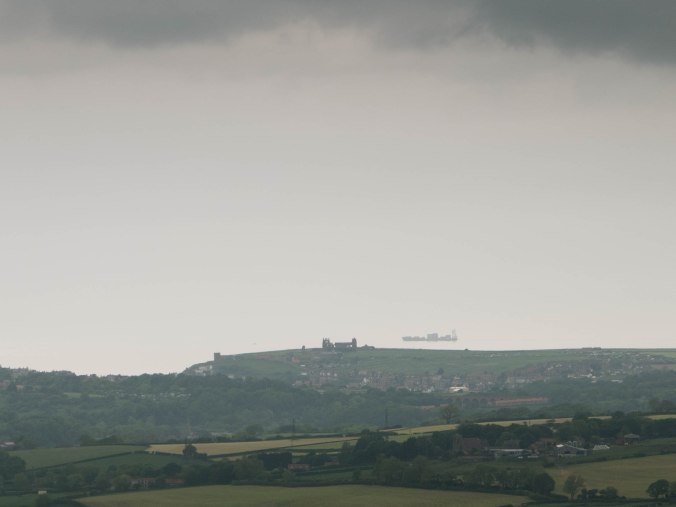 Eerie Distance Glimpse of the Sea. A Freighter Passing the Ruins of Whitby Abbey.

On my past walks, I was always ready for my adventure to end, but on this walk, the walk that’s been the most demanding and exhausting, I really didn’t want to stop. I’d gladly keep walking for another few days.

It’s with that conflicted emotion that I reached the coast, three miles north of Robin Hood’s Bay. I shuffled along the coastline, the trail sending me off with a final hilly reminder that my knees, like the rest of me, are getting older.

I reached the top of the village of Robin Hood’s Bay. Descended the steep streets among throngs of vacationers unaware and disinterested in my achievement. Surrounded by more people than I’d seen in a week and feeling more isolated than ever. Stepped out onto the beach, caught the receding tide, and dipped my toe into the North Sea. I reached into my pocket and took hold of the smooth stone I’ve carried from the beach at St. Bees and threw it as far as I could into the sea.

As tradition dictates, I went for a drink at the Wainwright Bar. Ordered a pint of real ale also named after the man. Drank it in one draught and ordered another, then another.